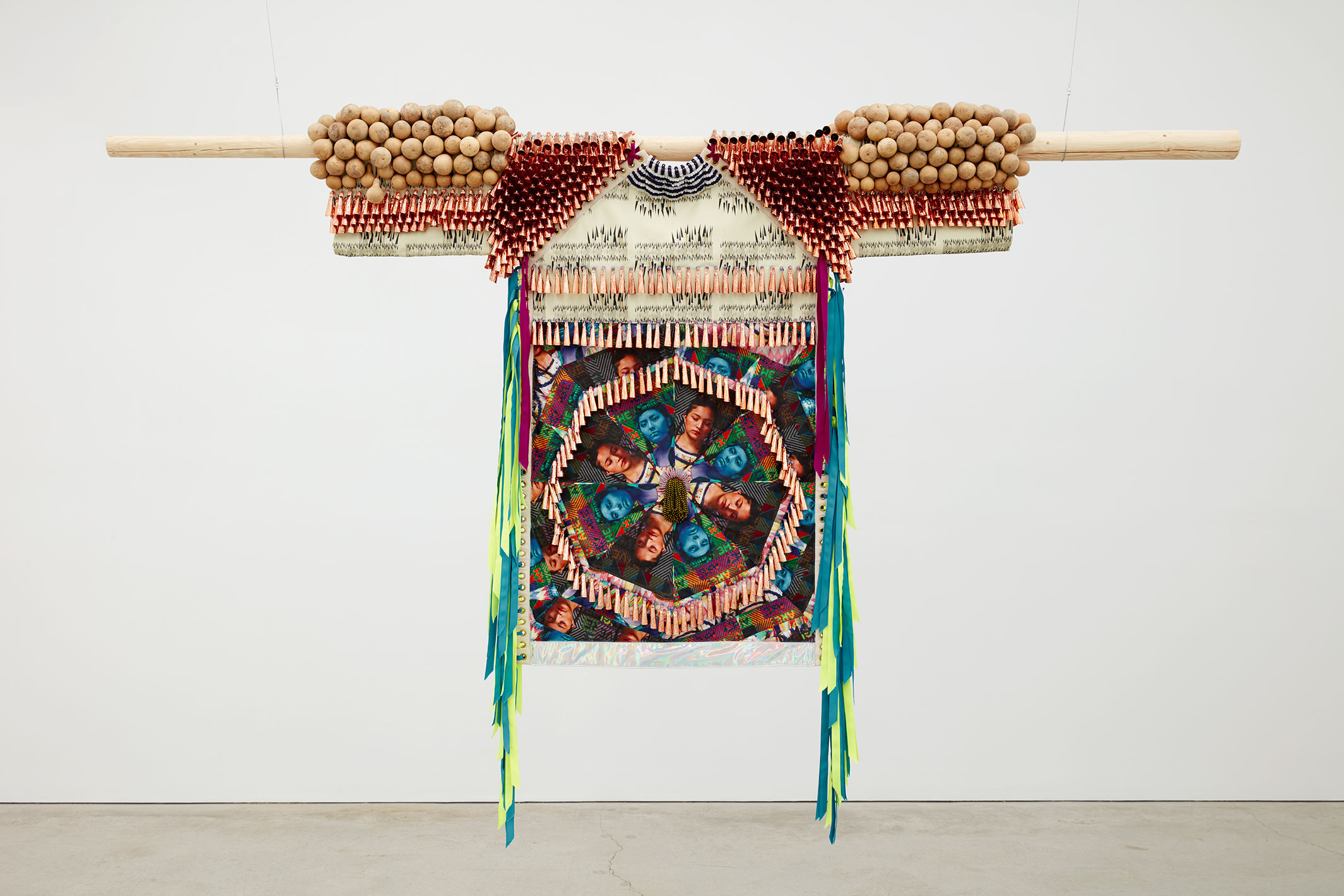 “The effort to grow and diversify SAMA’s contemporary art collection is strategically and thoughtfully led by Suzanne Weaver, the Museum’s Interim Chief Curator and The Brown Foundation Curator of Modern and Contemporary Art, whose understanding of contemporary artistic practices and long-standing relationships in the art world continue to benefit the Museum exponentially,” said Emily Sano, Co-Interim Director.

“The ongoing expansion and enrichment of the Museum’s contemporary art collection reflects our deep commitment to bringing diversity, inclusivity, and new narratives to the contemporary art collection,” said Weaver. “We are thrilled to add, for the first time, extraordinary works by contemporary Native American artists as well as those representing and exploring the lives and experiences of Black and Latinx communities. The gifts of two artists who were included in the exhibition Texas Women: A New History of Art highlight the Museum’s commitment to Texas artists, the lifeblood of our communities.”

“I also want to express my gratitude to Lana Meador, SAMA’s Assistant Curator, for her support and contributions in realizing these important acquisitions; to members of the Collections Committee; and to the artists, donors, and dealers for their generous support,” Weaver added. “We look forward to developing fresh installations and programming to engage our audiences with these new acquisitions and to continuing to build our contemporary art collection in diverse, meaningful, and lasting ways.” 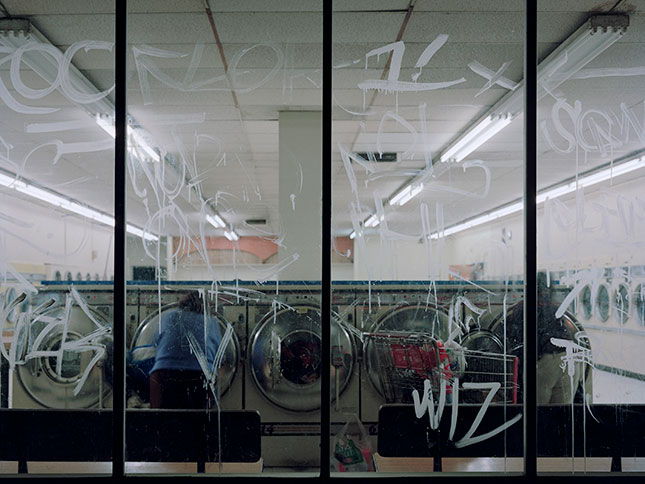 Christina Fernandez (American, b. 1965)
Lavanderia #2, 2002–2003 (printed 2020)
Archival pigment print mounted on black Dibond, black wood frame, stained finish, archival setback, Optium museum acrylic; Edition of 6
30 x 40 inches
© Christina Fernandez
Across her expansive body of work, Christina Fernandez explores issues of labor, visibility, and identity through images of landscapes and built environments. In her Lavanderia series, she focuses in particular on the facades of laundromats in her East Los Angeles neighborhood as a means of examining the domestic world of working-class Latinx communities. Employing a long exposure during the evening hours, Fernandez captures the building’s stark storefront windows and illuminated interior with great detail. The incredible crispness and precision of her images also lends a sculptural quality, inviting the viewer to step into the scene. Lavanderia #2 continues to expand the Museum’s growing photography collection and establishes a greater diversity of work by women and Latinx artists within its holdings. The work was purchased with funds from the Brown Foundation Contemporary Art Acquisition Fund. 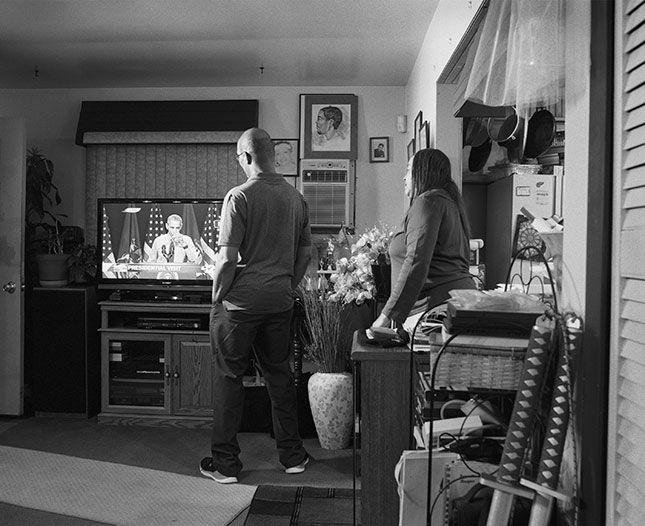 Flint is Family, 2016
Video (color, sound)
Edition 3/5
11 minutes, 50 seconds
LaToya Ruby Frazier's work examines the confluences of social justice and cultural changes, offering astute commentary on the American experience. Her incisive work, which is informed by documentary practices from the turn of the last century, includes photographs, videos, and written texts that explore the complicated nature of family, the American healthcare system, industrial pollution, income inequality, race, and many other subjects critical to our national dialogues. The photograph and video entering the Museum’s collection are part of Frazier’s series Flint is Family (2016–2017), which she developed over the course of a five-month period and captures the water crisis in Flint, Michigan and its effects on that community’s residents through intimate and lush imagery. Frazier’s works add an important voice to the Museum’s documentary photography holdings, which include significant works by such artists as Walker Evans, Leonard Freed, Dorothea Lange, Russell Lee, Danny Lyon, and W. Eugene Smith, among others. The work was purchased with funds from the Brown Foundation Contemporary Art Acquisition Fund. 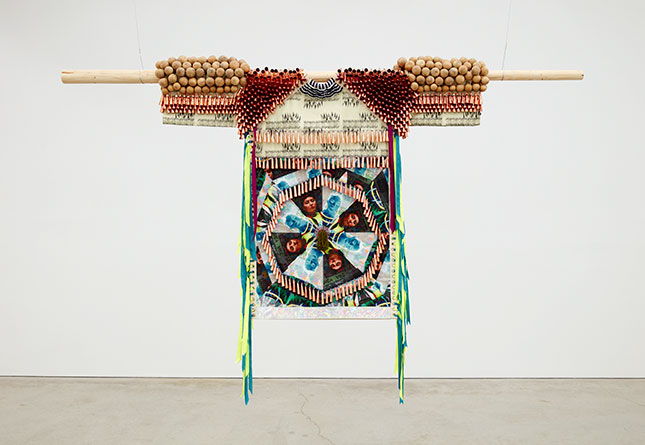 Jeffrey Gibson (Choctaw and Cherokee, b. 1972)
The Anthropophagic Effect, Garment no. 2, 2019
Canvas, cotton, vinyl, brass grommets, nylon thread, artificial sinew, dried pear gourds, copper jingles, glass and plastic beads, nylon ribbon
Overall: 58 x 72 inches
© Jeffrey Gibson
Photography by Jason Wyche
Through his multidisciplinary practice, Jeffrey Gibson explores and redresses the exclusion and erasure of Indigenous histories and artistic traditions. He often employs a hybrid approach that mixes references from popular culture, queer iconography, and contemporary political issues, exploring the complexity and fluidity of identity. The mixed-media work The Anthropophagic Effect, Garment no. 2 was created during a 2019 residency at the New Museum during which Gibson researched the Indigenous techniques of river cane basket weaving, birch bark biting, and porcupine quillwork, which he incorporated into his work. The series speaks to the concept of anthropophagy as a cultural cannibalism in which Indigenous cultures might consume Western or White dominance to create a new visual tradition. The work builds on garment works that Gibson began making in 2018 that are inspired by Ghost Dance movement of the Paiute people. The Anthropophagic Effect, Garment no. 2 is among the first two works by contemporary Native American artists to enter the Museum’s collections and was purchased with funds from the Brown Foundation Contemporary Art Acquisition Fund.

Hock E Aye Vi Edgar Heap of Birds (Cheyenne and Arapaho, b. 1954)
Trail of Tears, 2005
Four aluminum panels; Edition 2/6
Overall: 18 x 105 inches
© Hock E Aye Vi Edgar Heap of Birds
Since the 1970s, Edgar Heap of Birds’s multidisciplinary practice has embraced language-based installations, paintings, drawings, works on paper, and sculpture. Leveraging the formal and conceptual qualities of his varied materials, Heap of Birds explores and reveals the often hidden and under-examined histories of native communities in the United States, emphasizing in particular the violence endured by Indigenous populations and the ongoing ramifications of those actions on native individuals and tribes today. His powerful works often embrace the aesthetics and language of contemporary times to establish parallels to and make accessible the narratives of the past. Trail of Tears, which references the forced removal of tens of thousands of Native Americans from their lands in the nineteenth century, is a poignant example of Heap of Birds’s conceptual and aesthetic concerns. Trail of Tears is among the first two works by contemporary Native American artists to enter the Museum’s collections was purchased with funds from the Brown Foundation Contemporary Art Acquisition Fund. 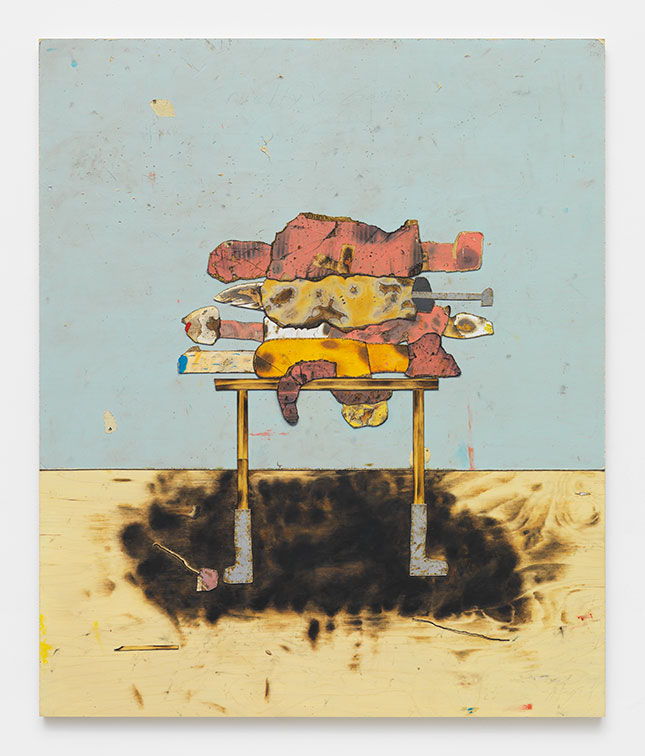 Kirk Hayes (American, b. 1958)
Cruelty’s Gate, 2015
Oil on panel
48 x 40 inches
© Kirk Hayes
Courtesy of Sean Horton (Presents), New York
Self-taught, Texas-based artist Kirk Hayes explores the illusionistic possibilities of painting. While on first glance Hayes’s compositions appear to be collages composed of humble materials such as torn paper, plywood, tape, and cardboard, further inspection reveals the two-dimensional nature of his trompe l’oeil works. To further complicate the artistic dialogues with which Hayes is engaging, his paintings are based on collages that he constructs in his studio and then destroys. This multi-layered process highlights Hayes’s examination and subversion of art historical movements and genres. At the same time, Hayes uses seemingly simple characters and objects to explore broader existential questions about failure, delight, and the human condition. The addition of Cruelty’s Gate to SAMA’s collection expands its holdings of both contemporary Texas art and works by self-taught artists—two important collecting areas for the Museum. The work comes to SAMA as a gift from New York-based collectors Alex Schmelzer and Lisa Rotmil. 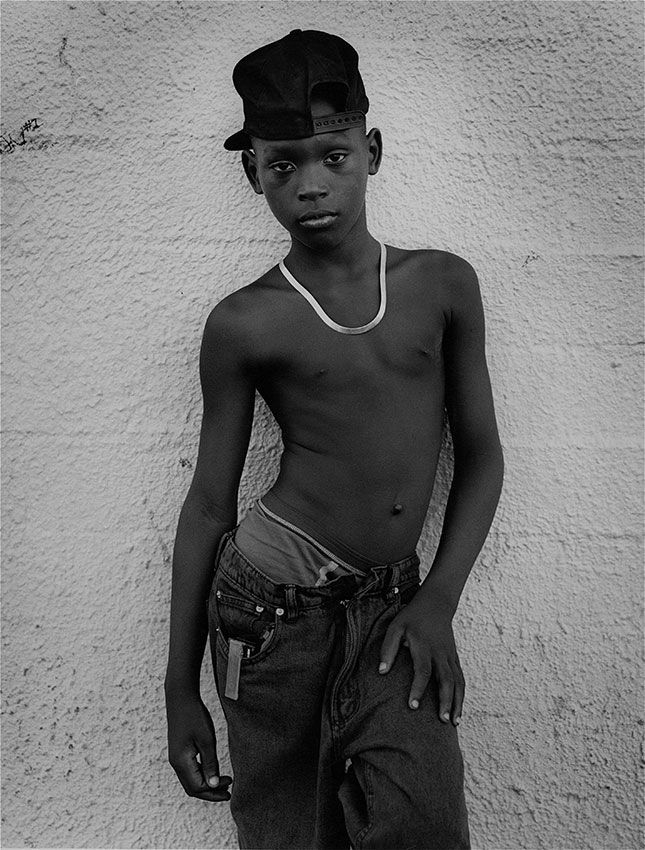 Earlie Hudnall Jr. (American, b. 1946)
Hip Hop, 1993 (printed 2017)
Gelatin silver print; Edition 3/3
40 x 30 inches
© Earlie Hudnall Jr.
Courtesy PDNB Gallery
For over forty years Earlie Hudnall Jr. has used his camera to document historically Black neighborhoods around Houston, Texas, focusing on the everyday lives of their residents. His intimate photographs, which capture moments of family and togetherness, preserve the history and culture of communities that have often been ignored and in instances even erased. Hip Hop—a portrait of a young boy—is a characteristic example of Hudnall’s focus on highlighting youth culture and the individuals within it as symbols of immense potential, strength, and resilience. Hudnall’s Hip Hop adds the voice of a singular Black artist to the Museum’s growing photography voices and provides interesting connections to Leonard Freed’s Black in White America series and Danny Lyon’s Memories of the Southern Civil Rights Movement series—both of which are part of the Museum’s holdings. The work equally broadens SAMA’s holdings of Texas photographers and strengthens its commitment to Texas art. The work was purchased with funds from the Brown Foundation Contemporary Art Acquisition Fund. 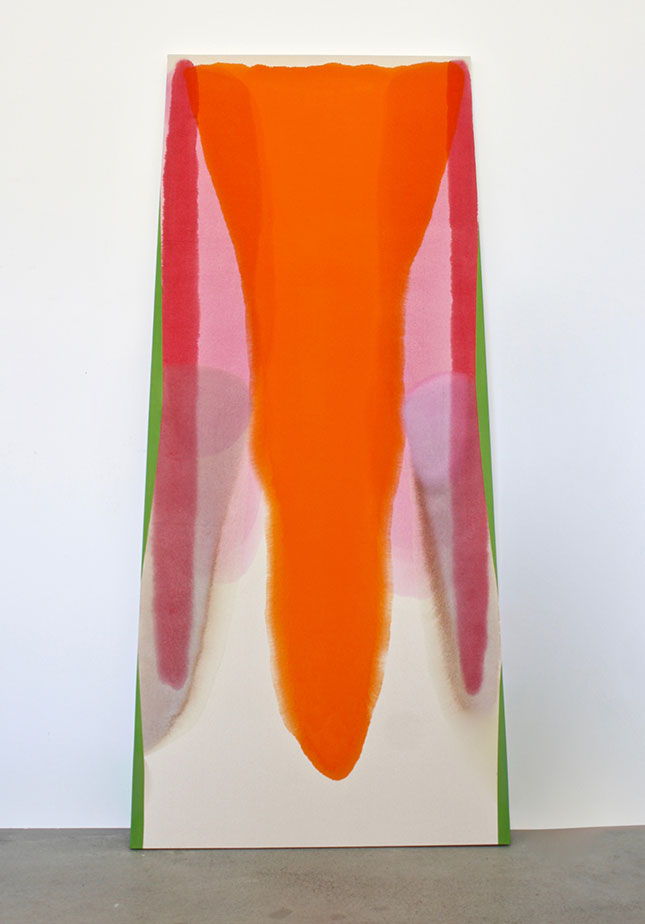 Marcelyn McNeil (American, b. 1965)
Ramp Painting #2, 2018
Oil on canvas
95 x 44 (bottom)/38 (top) inches
© Marcelyn McNeil
Courtesy of the artist
Recalling the gestural, intuitive, and improvisational Color Field paintings of Helen Frankenthaler (American, 1928–2011) and Morris Louis (American, 1912–1962), Marcelyn McNeil embraces the chance, gravity, and the viscosity of paint to create works that are characterized by sensuous forms that seem to glide and shift in and out of the surface plane. To create these sumptuous works, she pours layers of thinned paint onto raw canvas that is gessoed on the back, allowing the pigment to slightly penetrate the surface of the canvas. The effect is an understated grace, expressed as shape and color slowly unfold across the canvas. Prior to committing to her painting practice, McNeil studied architecture, and her paintings also reflect a deep knowledge of spatial concerns. McNeil’s Ramp Painting #2, which was on view in the Texas Women: A New History of Abstract Art exhibition earlier this year, expands SAMA’s collection of contemporary abstract paintings and its holdings of contemporary Texas art. The work is a gift of The Ackerley Family Collection, Houston, TX. 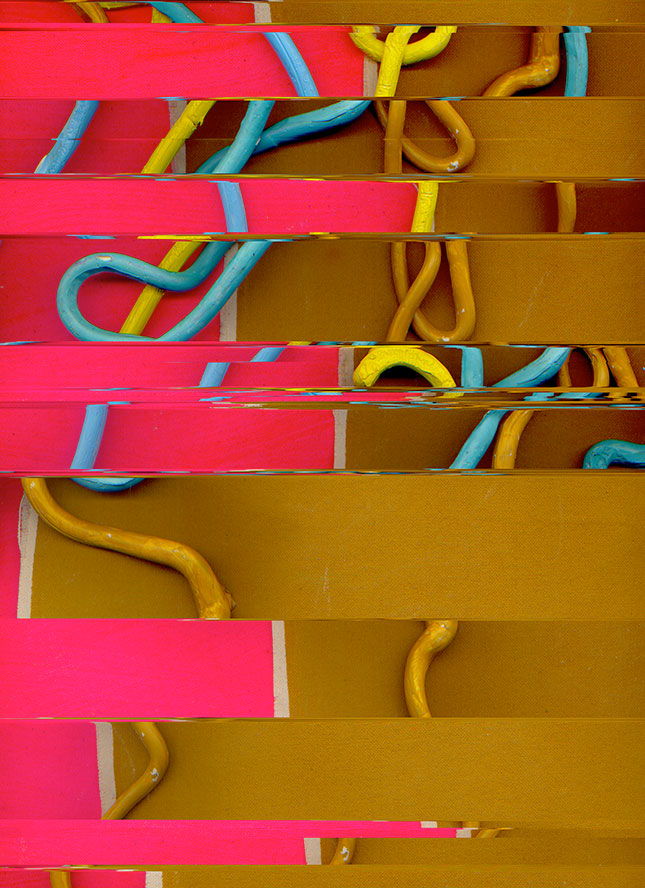 Liz Trosper (American, b. 1983)
toothy zip (neon:ochre), 2019
UV inkjet print on canvas
102 x 74 inches
© Liz Trosper
Courtesy of Barry Whistler Gallery
Photography by Liz Trosper
Toothy zip (neon:ochre) was part of SAMA’s recent exhibition Texas Women: A New History of Abstract Art, which explored the role of Texas-based women artists in the development of abstraction. The youngest artist in the exhibition, Trosper is part of a group of postmodern painters who are unpacking and questioning the meaning and relevance of painting, the hand, and gesture in the digital era. To create her monumental “scanner painting,” Trosper assembles found objects from around her studio—from dried skeins of paint to scraps of canvas—along with cut-outs from lifestyle magazines on the bed of a scanner. The scanning process captures these elements along with a series of blurs, blips, and mistakes, which speak to the glitches in our own contemporary experiences. By working in large scale and incorporating skeins of paint from her studio floor, Trosper recalls Jackson Pollock’s action paintings and critiques the heroic gesture of the male artist, acting out his existential experience upon the canvas. At the same time, her exploration of the intersection between painting and printing—the hand and the mechanical—has precedent in the work of Pop artists such as Andy Warhol and Robert Rauschenberg. Toothy zip (neon:ochre) comes to SAMA’s collection as a gift from Barry Whistler Gallery in Dallas and the artist.

About the San Antonio Museum of Art
The San Antonio Museum of Art serves as a forum to explore and connect with art that spans the world’s geographies, artistic periods, genres, and cultures. Its collection contains nearly 30,000 works representing 5,000 years of history. Housed in the historic Lone Star Brewery on the Museum Reach of San Antonio’s River Walk, the San Antonio Museum of Art is committed to promoting the rich cultural heritage and life of the city. The Museum hosts hundreds of events and public programs each year, including concerts, performances, tours, lectures, symposia, and interactive experiences. As an active civic leader, the Museum is dedicated to enriching the cultural life of the city and the region, and to supporting its creative community.
###