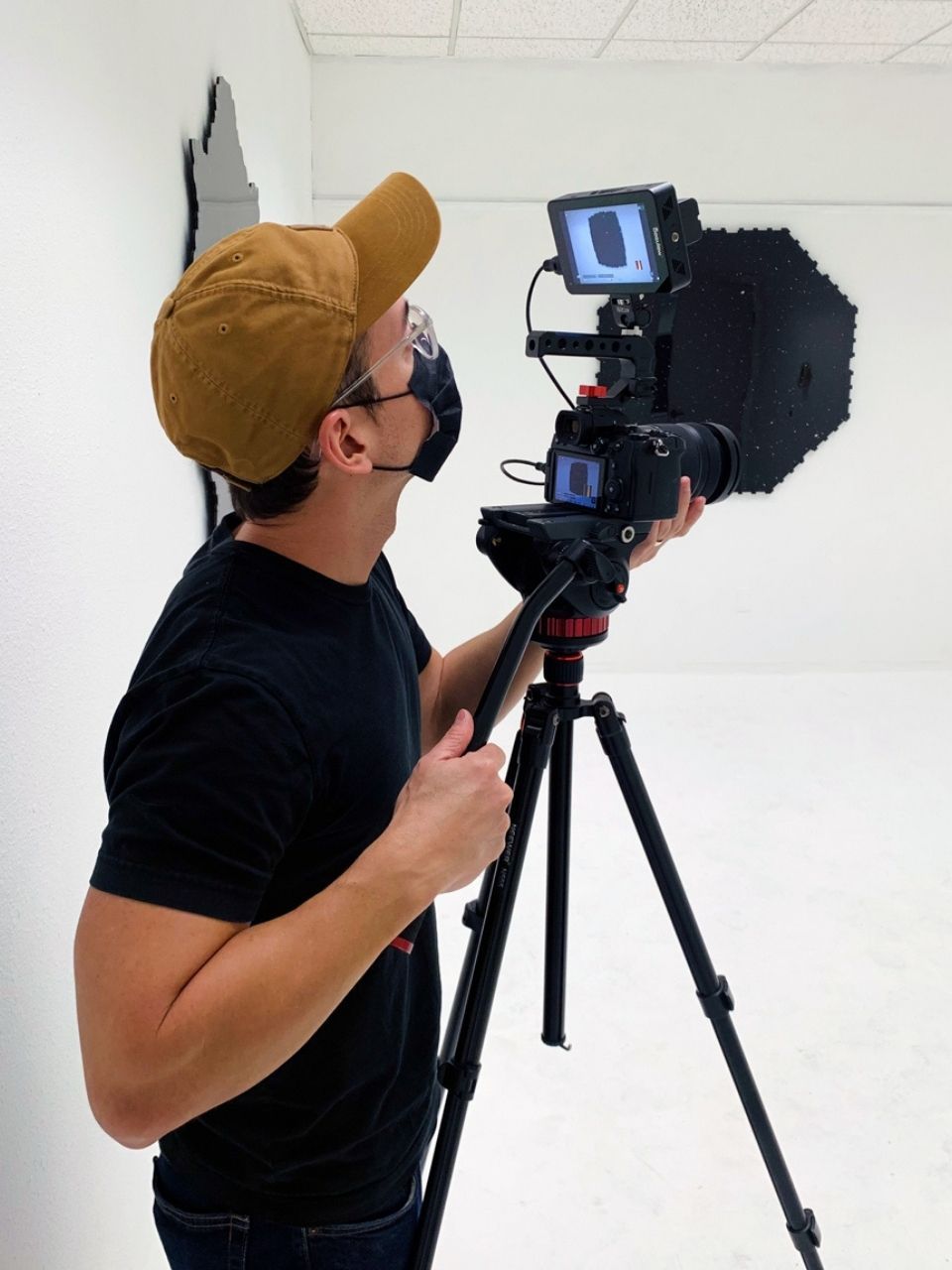 With generous support from the Art Bridges Foundation, SAMA commissioned Angela Guerra Walley and Mark Lee Walley, the duo behind Walley Films, to create a video series highlighting the artists and artworks selected as part of the Initiative to Acquire Art by Contemporary San Antonio Artists.

Angela shared some of her thoughts about the filming process, sources of inspiration, and working with artists.

How did you get into filmmaking?

Filmmaking was what brought us together at the age of sixteen. The first time we met, we were juniors in high school, and Mark was behind a camera making a short film with a mutual friend who asked me to play a part in the film. We started dating shortly after and making films was just one of the many ways we began collaborating. Throughout college we were making experimental and narrative short films, and after college we began producing short documentaries following San Antonio based visual artists for Glasstire. That led us to meet and work with other Texas-based artists, arts organizations, galleries, and museums. Artist documentaries have been our primary focus for nearly thirteen years now.

Where do you find inspiration?

A significant turning point in our work was watching the documentary film Running Fence by Albert and David Maysles following artists Jeanne-Claude and Christo. We had the opportunity to see the film at Dallas VideoFest and we met Albert Maysles, who spoke of his love for the subjects he follows. It was an inspiring experience that eventually led us to start producing our own documentaries following artists.

Since our film work is deeply rooted in our local art community, we find the most inspiration from the artists we’re profiling. So much of our visual style for each film is influenced by the visual aesthetic and energy of the artists and their work. We try to be in tune with the artist, which impacts what we shoot, the way we shoot, the pacing of the edit, and the music we select or produce for the film. We’re so inspired by San Antonio and the community and friendships we’ve found in the art scene here.

What is the process like filming eight videos at the same time?

The simultaneity was one of several challenges for this series. We had to be flexible and creative in our approach because not only had the artworks already been made, but the pandemic was ongoing, and we tried to be considerate of the artists and their safety.

We decided to start with a different approach by recording audio-only interviews with the artists first. This gave us an opportunity to get to know the artists and prepare for filming based on their responses. We really love the opportunity to research, so we spent time finding additional elements, such as archive material from books and historic film clips to best visually tell the story behind each artwork.

It was really a deep dive into the inspiration the artists had originally found, so it became a collaborative effort with the artists to put the whole story together. We often imagine being our audience, asking ourselves, “What do we need to know to better understand the artwork?” We take all our experience, from the first film we made together to the most recent, to find creative solutions, so the audience can gain the most insight and appreciate the story the artist is sharing with us.

What is your favorite thing about filming with artists?

Our favorite thing about filming with artists is the infinite sense of curiosity it brings us because every artist has a different story and a different process of making. Being behind the scenes has always appealed to us as makers. We didn’t find our community in the film world, we found it in the visual and performing arts worlds, so we feel most at home in makers’ spaces and alongside artists.

What's something no one knows about filmmaking?

Perhaps it’s not unknown, but the importance of audio is often undervalued. People tend to focus on the visual aspect of video, but audio has always been equally important in our filmmaking. For this series we conducted audio-only interviews to make the artists feel more at ease off-camera, but also to capture the best quality of audio. We also made sure to put wireless microphones on the artists to capture the sounds of their making process. Lastly, we were very considerate of the music we selected and even produced original music to best fit the tone and feel of each film. These audio elements play a large part in helping provide a connection between the audience and the artists. Cinematography is of course of great importance to us, but filmmaking is most successful when both the visual and audio experiences are thoughtfully considered.

Any special behind the scenes moments that didn't make the films?

Our documentary style intentionally keeps our physical presence out of the films, but we were very much present with each of the artists in this series. We spent hours chatting with artists, traveling to locations, enjoying coffee or lunch. We believe building personal relationships and trust with each artist is integral to the success of the film. Perhaps this connection we make with our subjects does make it into the films because you see their joy and their comfort on camera that we hope we’ve made possible through our friendships with them.