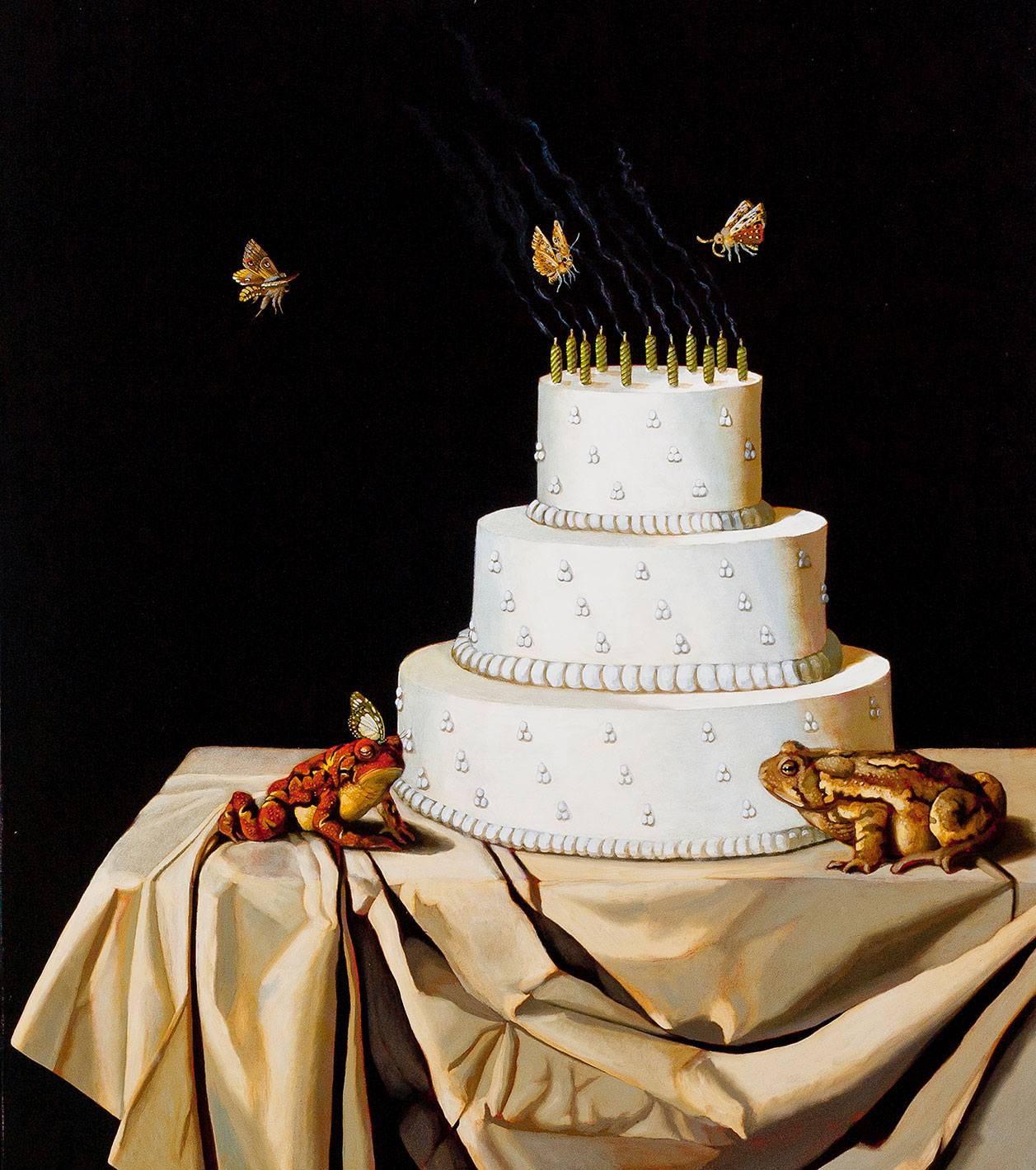 What do a biblical tale of disaster, cake, and a San Antonio painter have in common? Lloyd Walsh, professor of fine arts at Palo Alto College has given the Tower of Babel an original twist in his 2002 painting, Untitled (Wedding Cake).

Born in Honolulu, Hawaii, Walsh moved to San Antonio with his military family in 1972, where he still lives and works today. He has exhibited at numerous Texas museums and galleries including the Blue Star Contemporary, the McNay Art Museum, the Finesilver Gallery in Houston, and the San Antonio Museum of Art. He has also had the opportunity to exhibit, teach, and study internationally, and has used those experiences to show his students that art can open the door to endless opportunities.

Walsh is known for his use of surreal imagery and neo-baroque style of painting, and Untitled (Wedding Cake) is Walsh’s unique take on the biblical story (Genesis 11:1-9) of the Tower of Babel and refers to the human drive for power.

The story is an origin myth, meant to explain why people of the world all speak so many different languages. After the Great Flood, it is said that all people spoke the same language, and they collectively decided to build themselves a tower that would reach the heavens in the land of Shinar, which would be present day Iraq. God did not appreciate this shortcut to heaven, which seemed to be a monument to celebrate the accomplishments of the people rather than their creator, so to dissuade them, he made it so that they could not understand each other anymore and scattered them all over the world. The word babel itself literally means “to confuse”.

Rather than a massive monument like Pieter Bruegel the Elder’s sixteenth-century painting The (Great) Tower of Babel, here the viewer is confronted with a bevy of seemingly contradictory objects. A huge, and really delicious-looking, wedding cake takes center stage. The artist uses butterflies to symbolize lost souls, and toads to represent vanity, much like that of Nimrod, who ordered the construction of the tower. Take a close look at the folds in the tablecloth and you will see a striking resemblance to the crumbling tower represented in Bruegel’s painting as well.

According to Walsh, the overarching theme of the composition is the hubris of ascension.

When I asked the artist why the piece is untitled, he told me he used to title his works but found they came off as either incredibly pretentious or overly descriptive in hindsight. A title would not do this painting justice anyway though, would it?