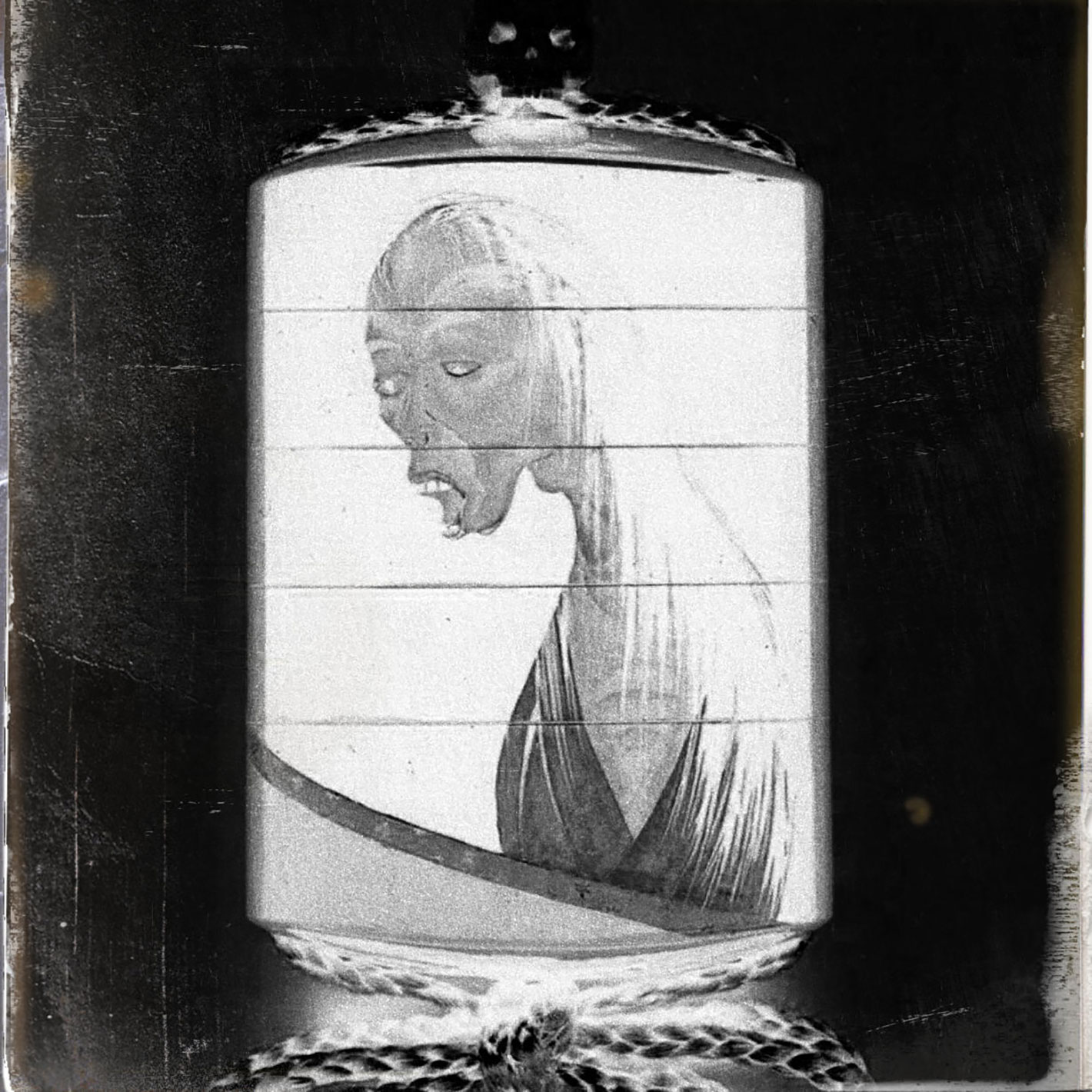 The Ghost in the Japanese Gallery

Each year, as the end of October approaches and the veil between this world and the next grows thin, I begin searching the galleries for… the unnatural. Ghosts. Spirits. The restless dead.

Well, not really. Not for actual ghosts. (Don’t get me wrong, the Museum is definitely haunted, but those are stories for another time.)

Rather, I roam the halls of the Museum hunting for works of art that correspond in some way to ghosts, the macabre, and other spooky-season staples. Imagine my ghoulish delight when I noticed this tiny piece in the Japanese gallery:

This is an inrō: a small lacquerware box with multiple storage compartments held together by a silk cord. It’s a men’s accessory, kind of like a tiny wallet, that could be used to store coins, medicine, a seal, or other such daily necessities. The cord is threaded under a wide belt and held in place by the large bead (called a netsuke) at the end. The decoration is the work of Shibata Zeshin, arguably the greatest master of Japanese lacquerware to have ever lived.

This inrō depicts an emaciated female figure whose skin possesses a necrotic hue. Her hair is patchy and unkempt, and her slack jaw reveals blackened teeth. (Teeth blackening, ohaguro, was a beauty practice in premodern Japan, particularly among women. It also had the benefit of preserving the teeth.) She wears a white funerary kimono and, on the back, spectral flames dance in the air. These characteristics identify the figure as a yūrei—literally a “faint spirit”—a class of supernatural entities analogous to our idea of a ghost. The spirit appears to emerge out of the inky darkness to stand over a mosquito net, under which—presumably—someone is sleeping, blissfully unaware of the horror hovering at their bedside.

Yūrei are the spirts of those who have died but remain bound to the material world due to a grudge, or a violent or untimely demise. They haunt typically at night, usually targeting the person(s) responsible for their death. You may be familiar with the concept of malevolent yūrei from Japanese-inspired horror films like The Ring (2002) or The Grudge (2004). Other times yūrei are more wistful—lost souls bound to our world by an unspeakable loss or unrequited love. I wonder while looking at this piece, what is it that this spirit desires? Consolation? Or terrible vengeance?

The inrō seems to have inspired a work by Utagawa Yoshiiku in a supernatural-themed series of prints. Yoshiiku’s spirit is a dead-ringer for Zeshin’s, but he’s made some notable changes. Gone is the mosquito net; instead, this spirit looks to be outdoors, standing in the rain. An inscription identifies the figure as ame-onna, a “rain woman.”

Wherever ame-onna go, bone-chilling rain follows. Under the cover of these ominous downpours, ame-onna sneak into houses and kidnap infants, dragging them away in huge sacks. For what purpose, no one knows. It is said that mothers who lose their children this way, driven mad with grief, become ame-onna themselves.

The motif on Zeshin’s inrō of a ghostly figure floating above a mosquito net is also reminiscent of a sub-genre of artworks depicting the climactic moment from the famous ghost story of Kohada Koheiji. Koheiji was a garbage kabuki actor. He was ugly, awkward on stage, and couldn’t remember his lines. His company leader felt sorry for him and, determined to find a good role for the actor, cast him as a ghost. Koheiji took to his new role with gusto, perfecting the gliding movements and chilling voice of a yūrei. It turns out Koheiji was very good at being a ghost.

When Koheiji was sent on tour in the countryside, his unfaithful wife and her lover hatched a plan to murder him. The lover, a fellow performer, met up with Koheiji, lured him into a swamp, and drowned him in the murky waters.

Time passed, but all was not well. Night after night, the couple was awoken by strange sounds, rancid stenches, and the unshakeable feeling that they were not alone. Finally, pulling aside the mosquito net with skeletal fingers, Koheiji appeared to the evildoers, his ghostly appearance in life made all the more terrifying by the decay of death.

Objects like Zeshin’s spooky inrō present wonderful opportunities to explore our morbid fascination with the uncanny and the inexplicable. I hope the next time you’re at SAMA, you’ll take the time to find the ghost in the Japanese gallery.

But… do beware: I’ve heard about all sorts of unusual occurrences in there….