Dr. Jessica Powers joined the San Antonio Museum of Art in 2006 and serves as Interim Chief Curator, The Gilbert M. Denman, Jr. Curator of Art of the Ancient Mediterranean World. She has curated many exhibitions at SAMA including 40 Years, 40 Stories: Treasures and New Discoveries from SAMA's Collection (on view October 16, 2021–January 2, 2022). Powers answered a few questions about the exhibition 40 Years, 40 Stories.

What is the exhibition 40 Years, 40 Stories?
In celebration of SAMA’s 40th anniversary this year, 40 Years, 40 Stories brings together a selection of artworks that have not recently been on display and shares their fascinating stories. The exhibition also features several new acquisitions that we’re putting on view for first time. The works in this exhibition span the globe, representing cultures on six continents and thousands of years of human achievements.

Is there a particular artwork that you would like to share?
It’s been especially interesting to learn more about SAMA’s rarely displayed African art collection while working on this exhibition. We’re including a mask that formed part of the attire worn for ceremonial dances by leaders of the Sande society, an important women’s organization among the Mende peoples of Sierra Leone. The mask embodies Mende ideals of female beauty, with lustrous black skin, ornately styled hair, and even a small jeweled earring.

What else stands out about this exhibition?
The exhibition shows some of the behind-the-scenes work that goes into caring for SAMA’s collection. Several of the works received recent conservation treatment, and we’re giving visitors a look at these projects and the transformative results. We’ve also included some images of the process of moving and handling the works—something the public doesn’t usually get to see. 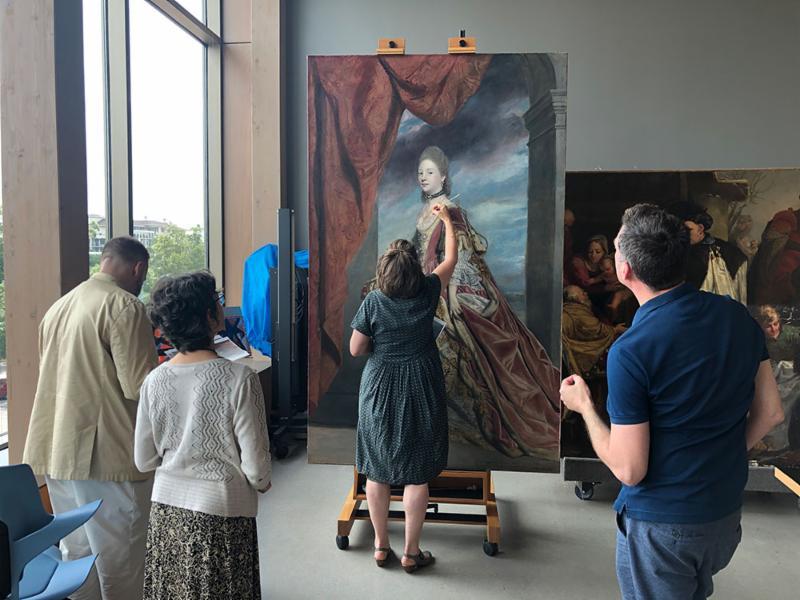 Conservators at the Museum of Fine Arts, Houston, cleaned and consolidated both the painting and the frame of Mary, Lady Arundell of Wardour between 2016 and 2019